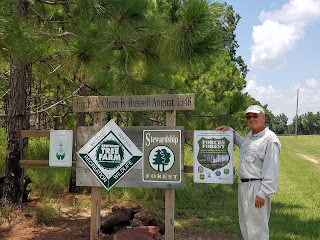 Russell Brothers Farm has received the distinction of the 2019 Florida Outstanding Tree Farmers of the Year. This annual award recognizes private landowners that have done a remarkable job of sustainably managing forests on their property. Russell Brothers Farm exemplifies a legacy of family forest managed not only for wood that may one day be harvested, but for water conservation, wildlife habitat and primarily to create a sense of place in honor of the Russell Family.

The farm was originally purchased by Jay and Clara Russell in 1946. Since Jay and Clara have passed on, the name on the deed has changed, but it remains family land that plays a central role in keeping the family together. John Russell lives on the property, managing it for the family, and hosting a large family gathering each Thanksgiving. They enjoy hayrides together hoping to catch a glimpse of some wild creature and marvel at the growth of young longleaf. Other times of year the Russell’s grandchildren and great-grandchildren hike down to Pine Barren Creek in the north part of the property to explore and play in the water. 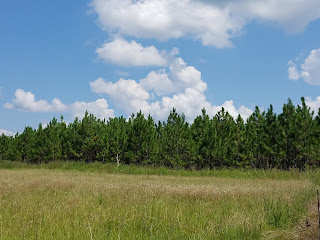 The 109-acre property has seen some changes over the years. Former row crop land is now a young but rapidly growing longleaf stand. A mature natural longleaf stand that was destroyed by Hurricane Ivan in 2004 has been replace by a younger stand with native grasses and wildflowers. A hay field separates the pine stands. Pine Barren Creek cuts across the northern boundary of the property and is surrounded by a variety of hardwoods, many of which are more frequently seen in areas north of Florida.

John works hard to keep up the property, hoping it will still be enjoyed by Russells in another hundred years. He maintains 3 miles of trails and is continuing a battle against invasive privet. John has become a certified prescribed burner in order keep up with the burning on the property. The two young longleaf stands were planted by John and his brother, Keith. These stands are burned on a two-year rotation to encourage a low and diverse understory. John is rewarded not only by a sense of accomplishment for what he is doing for the land and his family, but also with sightings of wildlife during quiet morning walks. Through his diligent and careful management, he has noted an increase in wildlife of all kinds. 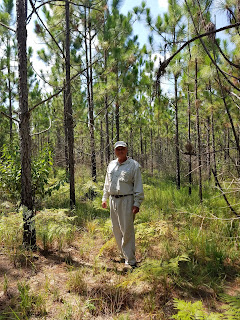 The Russells have always tried to do what is right for the land. Jay Russell started this legacy becoming part of a Soil Conservation Service program to stop erosion that had formed gullies on the edge of row crop fields. A Streamside Management Zone, which keeps trees and other vegetation in place, is maintained along the creek to keep soil from eroding off the steep slopes into the creek. John continues the legacy by attending landowner workshops and enrolling the property in programs such as the American Tree Farm System that will assist him in his efforts to create a healthy longleaf ecosystem, conserve soil and water, and increase wildlife.


One family’s healthy forest is a community benefit and John does his part. Not only does he hope a younger generation of Russells are inspired to continue the legacy of caring for the land, but he tells stories of other children who have come to the property as family friends or in school groups, some who have never been in rural settings. He is pleased that these children leave in wonder at what they have seen and is happy the property can be used to spark their imaginations and educate them on the value of forest ecosystems.


John has shown leadership in sustainability and legacy. The Russell Brothers Farm is a gem in the Oak Grove community where evidence of good forest management is readily seen.

Posted by Florida Land Steward at 8:02 AM