The Florida Land Steward Partnership is very enthusiastic and pleased to honor Ms. Helen Roth, the Florida Land Steward Landowner of 2015.  Helen and her property were featured in the Fall/Winter issue of the Florida Land Steward Newsletter. The following is a recap with some additional photos from her Forest Stewardship tour in April 2015. Spring Canyon LLC is a 100-acre Gadsden County property owned and managed by Helen, her husband Tom, and many energized and passionate friends and volunteers who share her passion for the land and its unique vegetation and wildlife. This beautiful property is home to steephead ravines and longleaf pine-wire grass sandhills.
Helen has traced the history of the property through property records and aerial photographs back to 1926 near the end of the turpentine era. In 1960, the land was donated to the First Baptist Church of Greensboro.  The church put in a dam on Crooked Creek to create a small lake in the center of the property.  Fire was excluded from the uplands during their ownership.
Helen’s brother, Mark Bane, bought the property in 1993 and began working with the Forest Stewardship Program in 1994. He harvested the hardwoods from two of the three upland areas and applied prescribed fire to one of the areas before he passed away in 2005 and the property passed to Mark and Helen’s father. In 2008, Helen and Tom purchased the land from her father and entered Forest Stewardship Program. At that time, the one upland area that had been cleared and burned was in good shape so became Helen’s reference area for what the rest of the uplands should look like. In the areas that that had been cleared but not burned, natural regeneration of longleaf pine had occurred, but the encroaching hardwoods were head high. Helen was able to get a contractor to come in and conduct a prescribed burn in 2011. She quickly learned that the fire helped control small hardwood saplings that were invading the uplands, but it did not control the larger hardwoods enough to open up the habitat. 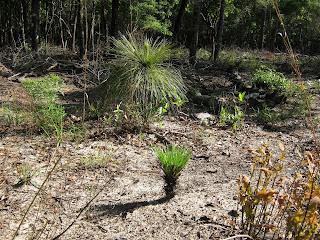 Helen’s goal for the property is to restore and maintain the longleaf pine-wiregrass uplands that will ultimately maintain healthy steephead ravines and provide good wildlife habitat.  In 2012, Helen entered the Working Lands for Wildlife Program operated by the Natural Resources Conservation Service.  The Working Lands for Wildlife Program is focused on creating and restoring habitat for gopher tortoises.  Helen was awarded a contract for 26.5 acres of brush management and prescribed burning.  The upland sandhills were divided into 3 treatment areas and work on clearing brush and trees up to 6 inches in diameter began in the summer of 2013.  Using a battery operated chainsaw, she and a volunteer cleared the first 8.5 acres by October of that year.  By January 2014, they had cleared another 14 acres.  In March 2014, the first burn on the three upland areas was conducted and Helen became a certified prescribed burn manager.  The final 4 acres of brush management was finished in August 2014. 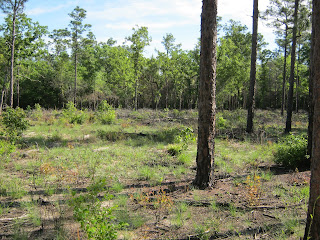 Since the completion of the brush management, there has been a noticeable increase in the number of gopher tortoises and fox squirrels using the property.  New burrows are appearing and inactive burrows are being re-activated.  The endangered Gholson’s Gayfeather (Liatris gholsonii) is one of many wildflowers exploding across the now open sandhill habitat, and the wiregrass has begun to recover after years of excessive shade and fire exclusion.  To say the transformation has been spectacular is an understatement.  One has to see the property to believe the change.

Helen loves to use the property to educate other landowners and those interested in Florida’s natural areas.  Over the years she has led tours for the Florida Forest Stewardship Program, Florida Native Plant Society and the North American Butterfly Association and the Florida Trails Association.  She has been visited by a number of university professors and researchers who have come to study the plants, wildlife, and ravines on her property.  Much of what she has learned about the plants on the property she learned from members of the Florida Native Plant Society.  She labels plants as people identify them so she is able to observe them throughout the seasons.  This is a great way to learn how to identify plants whether in flower or not.  Her philosophy has been that you need to learn the plants on your property so you know which ones are most vulnerable and need protection, and which ones are invasive and need to be removed to protect the native habitat.  She encourages other landowners to get involved with their local native plant society chapter and begin learning the plants on their property.  The more you learn, the more you will enjoy your property.
Helen's passion and hard work to restore her Spring Canyon property is an inspiration to all of us. Hats off to Helen, the 2015 Florida Land Steward Landowner of 2015!
Posted by Florida Land Steward at 8:22 AM